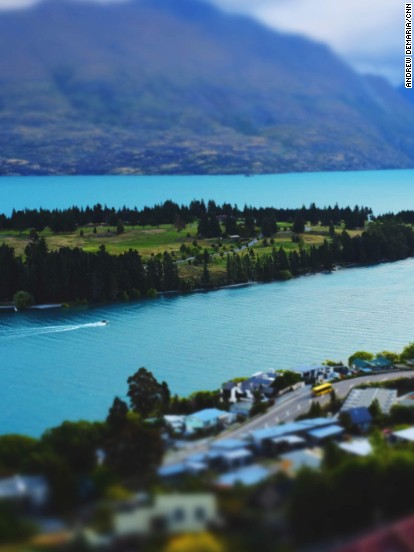 It’s the perfect spot for a photo. But for now, there are very few tourists about.

“It’s usually quiet for us in the winter,” says Betty Perkins, the owner of Million Dollar Cruise, which has been running boat tours of Queenstown’s lake for 13 years. “But not this quiet.”

There are now no active coronavirus cases in New Zealand, a country of five million people. But borders remain closed, and there is still no firm date for a much-anticipated trans-Tasman bubble, which would open up travel with neighboring Australia.

According to Queenstown NZ, the organization responsible for marketing the area, about 55% of the town’s GDP comes from tourism, and government statistics show the Queenstown-Lakes district has one of the highest GDPs in the country.
But the coronavirus pandemic has changed that. Some cafes and souvenir shops around the lake are closed. Ski operators, who usually start to open in early June, have delayed the start of their season. Key attractions like the Shotover Jet boat ride down canyons have shut their doors until July.

The Nevis swing pod in New Zealand may just be the most extreme ride in the world, catapulting people nearly 500 feet in mere seconds.

All of this means that thousands are already out of jobs.

Queenstown Lakes mayor Jim Boult estimates that around 7,000 people are currently unemployed, with migrant workers making up around half of those. A recent report forecast Queenstown’s overall unemployment rate would rise from 1.1% in March this year, to 18.5% in March next year — double the forecasted national unemployment rate.

That’s taken the town from one of the richest in New Zealand to one of the poorest, says Boult.

“People are worried, really worried about their jobs, their abilities to provide for their families, their ability to pay their mortgages and their rent,” says the mayor, adding that some people who lost their jobs were close to retirement.

“At the end of the day, virtually every job in the district is dependent on some version of tourism.”

Perkins is one of the lucky ones — she owns her own business, and they have few staff and little overhead, meaning they haven’t had to lay anyone off. Still, she estimates that her business’ income has dropped 70% compared with normal.

“We’ll just have to plod on, we’ll wait for Australia to come,” she says.

It’s a similar situation for Dong Wang, who runs a small dumpling cart on the lakeside. He is the sole income earner for his family, but his earnings have fallen from around 200 New Zealand dollars ($130) per day to just $50.

“There’s nothing I can do,” says Wang, who hails from China but has permanent residency in New Zealand. “Finding a job is so hard. So I just keep going.”

Others in Queenstown face an additional issue — they’re not citizens or permanent residents of New Zealand, so they don’t qualify for the unemployment benefit. Statistics show that 40% of Queenstown’s residents at the last Census were born overseas, although it isn’t clear how many are permanent residents.

A worker in a Queenstown souvenir shop who arrived from China six months ago and who did not give her name for fear of reprisal says that she was about to be made redundant. If she can’t find another job, she may have to return to China, she says.

The council is providing food vouchers, medical assistance, help with utility payments and even warm clothing, Boult says — but he believes that the issue of unemployed migrant workers is “a humanitarian crisis in the making.”

For now, with New Zealand’s borders shut to almost all foreigners, only people already in the country can visit Queenstown.
In the past, New Zealanders have avoided Queenstown as it has so many international tourists. Now the town is trying to lure them there — Boult even did a bungy jump to mark the easing of the country’s coronavirus restrictions in May.

Over a recent holiday weekend, businesses reported seeing a boom as people from around the country descended on the town.

But, Boult says, businesses “won’t survive” on domestic travelers alone. He’s hoping that the trans-Tasman bubble will be up and running by July for the ski season, where Australians make up 30-40% of customers.

“This really is make or break,” he says, adding that if there is no trans-Tasman bubble by July, more businesses will fail and more jobs will be lost.

Boult believes that Queenstown may never return to its pre-Covid tourism levels in terms of numbers of arrivals, and is already looking at ways the town can diversify, including whether it can move into the education, film and medical tourism sectors.

Simon Milne, a professor of tourism at Auckland University of Technology, says that all predictions should be taken with a grain of salt. But he says that Queenstown — a place where so much of the economy is based on tourism — will be hit harder than many other parts of New Zealand.

For those still able to visit Queenstown, though, the current situation isn’t all bad.

Canadians Anna Wilhelmus and Kristy Caldwell were in Queenstown on Friday visiting. They are based in Christchurch where they are half-way through a year of studying abroad, but decided to come down to explore the area.

“It’s kind of nice to have it all to ourselves,” says Caldwell.